Petty's Orchard on the river flats at Templestowe is now a demonstration orchard run by the Board of Works. The original old fruit shed has been faithfully restored to its original conditions and a section of the orchard has been set aside for visitors to inspect. There is a car park and an area for displays.
On Saturday 2nd March 1985, there will be an opportunity to visit this beautiful area, when the Historical Society will hold a field day with the theme "150 Years of Fruit Growing".
An interesting program is being arranged with displays and demonstrations showing the way it used to be. Ploughing, picking, sorting, and grafting are among the items on the program.
The afternoon is planned for March when the Jonathon Apples will be ripe.
The Orchard Museum has only been made possible by gifts of equipment from the district. The Museum is a valuable record of fruit growing methods and equipment of the past. Without such a collection of equipment knowledge of the industry would become lost. The latest equipment is a set of wheels on an axle, and Cool Store trolleys donated by Mr. & Mrs. W.L. Smith. Orchard Equipment has also been donated by Messrs. Doug Zerbe, Jim Clay, Les Hardidge, J. Aumann and Harold Morrison

Petty's is one of Melbourne’s oldest commercial orchards, and it holds the largest collection of apple varieties on mainland Australia, with more than two hundred varieties of old and rare apples.

Open every Friday for organic produce markets and also by appointment. For school or group tours phone 9726 9784

There is a single toilet block which has facilities for the disabled. The car park and Demonstration Orchard are relatively flat providing disabled access, although tracks through the latter are fine gravel and mown grass which can be slippery when wet. The wetland and bird hide are less accessible and people with physical mobility problems will have to be fit to negotiate some areas.

While managed by Parks Victoria, 25 hectares of Pettys is privately leased to a commercial operator. Please respect the rights of the orchardists by not entering this area or picking any apples. The Heritage Fruits Society maintains and promotes the heritage collection at Petty's Orchard. www.heritagefruitssociety.org.au

How to get there
Organised groups may visit Pettys Orchard at any time of the year by prior arrangement, the most interesting times being fruiting, pruning and blossom seasons. For directions and access into Pettys Orchard, please contact the Parks Victoria Information Centre on 13 1963.
Melways 22 A12.

In 1853 Thomas Petty arrived in Australia from England and selected land in the Doncaster and Templestowe area. It was Thomas Pettys' grandson, Thomas Henry, who, in 1911, first bought the property that is located at Homestead Road, nestled along the Yarra River.

Thomas Henry was the first of three generations of Pettys to work the Homestead Road orchard. The Petty Family managed the orchard until Parks Victoria purchased the property in 1981.

The orchards that once covered the Doncaster and Templestowe area are fast disappearing. The Heritage Fruit Society manages and maintains the heritage fruit collection in Petty's Orchard. We are part of a world wide network which is conserving antique apple varieties and protecting them from extinction.

ORIGINS
The Heritage Fruits Society has its roots in the East Gippsland Organic growers association who, in 1992, handed over the work they had done so far to a new sub-group of Permaculture Melbourne Inc. – The “Heritage Fruits Group- HFG”. Under this banner we ran “grafting days” as well as talks for community groups, conferences and schools on the benefits of saving the old fruit varieties for the future.
We also collected varietites, established private collections and added varieties to existing collections when possible. This continues today.

PETTY'S ORCHARD
In 1999 we began working with Petty’s Orchard in Templestowe to help save the collection established there in 1984, which includes 200 varieties of heritage apples on different rootstocks and demonstration trellis systems.

APPLE FESTIVAL
This work increased when the group began to run the two-day Apple Festival, which was held annually on the last weekend in March. Each year some members look after the organisation of the event while others spend those two days running tours through the orchard collection and arranging displays of 120+ varieties for the public to see and as many as 80 to taste.
We also set up permaculture displays to improve public awareness of how to design mixed home orchards, how to grow trees in the backyard and all the management techniques needed. These simple systems help to do lots of the work for you.

HERITAGE COLLECTION
The workload and focus shifted in 2003 when the group took on the Petty’s Heritage Collection - two acres of old apple varieties not available in supermarkets, which are in danger of being 'lost' to gardeners. In 2007 we officially took on the full responsibility of the collection's maintenance and the costs involved, with a “gentleman’s” sub-lease.
During the sixteen years that the Heritage Fruit Group was running, a dedicated band of around sixteen people did most of the tasks but also, through this work, significantly increased their knowledge of fruit trees and old varieties. Some now run their own nurseries and many other related ventures.
HERITAGE FRUITS SOCIETY
At the 2006 Collingwood Children’s Farm Heritage Fruits Day, members decided to look towards incorporation of this group due to the constraints we faced with getting grant money to fulfil some of the plans we had to improve and expand the collection from 200 to around 600 varieties still surviving in Victoria. The existing organisational structure did not suit the standards that some funding bodies required and the move would also open many more doors for us to help save the collection and improve it.
Therefore in May 2008 the Heritage Fruits Society Inc. (HFS) was formed (this took over a year to complete).
Why do this and what benefits are there? Similar groups in other states have more than three hundred members. The new HFS does not require people to use only organic methods to grow fruit; or require you to join a group that may not be “your cup of tea”, the focus is on the conservation of the varieties and the sharing of propagation materials to help people conserve these at home or in the orchard.
Of course many in the group will continue to grow fruit under Certified Organic, Biodynamic and chemical free Permaculture systems and are willing to share their experience. This is fast becoming the choice of farmers and certainly is the fastest growth area in food production that is due to the very high customer demand worldwide.
We have seen commercial orchardists with large collections in all parts of the world, because once you learn the simple art of grafting new varieties it often becomes infectious. Some of our members have 300+ different apples at home, but apples are not the only fruit we care about. We are just as happy to save pears, nashi, figs, berries, plums or avocados not to mention all the more exotic fruits that can be grown.

1931 aerial photograph of Pontville area. The track in the centre leads to Pontville homestead. On the left Monckton Road leads from the end of Newmans Road and curves round to Homestead Road and Petty's orchard. DP0337 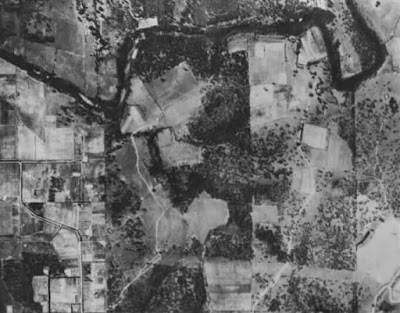 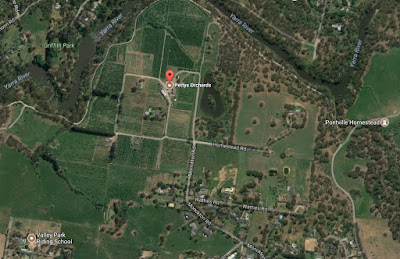 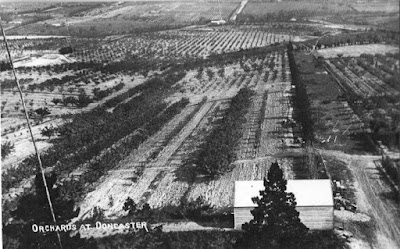 Major Charles Newman's land viewed from Sweeneys Road in Eltham across the Yarra showing land that once belonged to Newman. Petty's Orchard on the right. Homestead Road on the left. 'Monckton', Major Newman's second house, was just off the picture on the left. 'Pontville', Major Newman's first house, further to the left. The high voltage power lines in the distance. DP0534 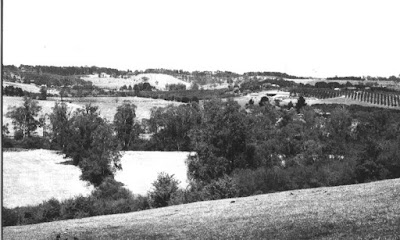 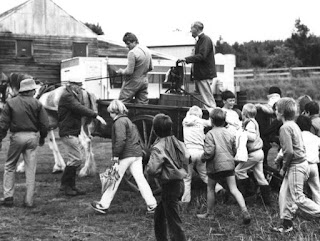 
The Shire of Bulleen elected the energetic Tom Petty as Shire President. Tom Petty had been a Councillor for ten years but retired two years later.

During March the Board of Works opened Petty's Orchard as a Metropolitan Park. The Orchard at the end of Monkton Road Templestowe was acquired some years ago by the Board to be preserved as a working orchard.  A contractor is running the main part of the area but one section, planted with antique apple trees, is open to visitors. Here different methods of cultivation are demonstrated. The original timber packing shed has been restored and will be fitted up as a museum.  As well as an arboratum with varieties of nut trees, a wet area was constructed to demonstrate an environmental dam.  The Historical Society has helped the Board of Works with historical details and old fruit growing photographs for the information shelter in the car park.
At the present time Pettyës orchard park is only open for groups by appointment.

Hint: Use AND between terms to restrict your results